Watcher in the Woods – Review 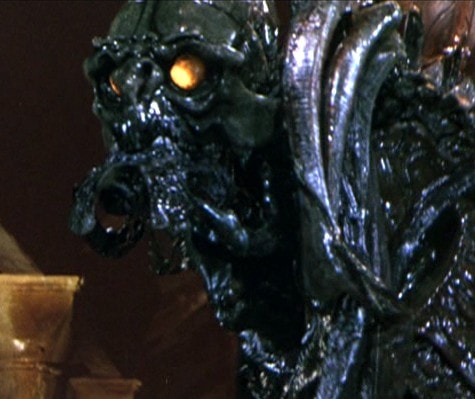 Imagine if I told you that Disney of all companies made one of the best Gothic horror movies of the 1980s (ok well it’s only vaguely Gothic but stick with me here), would you believe me or would you actually have the audacity to balk at such at my seemingly outlandish statement? Well it doesn’t matter because by reading this review I’ve already won.

In the late 70s, after years of making only G-Rated films and before they founded Touchstone Pictures, Disney decided to foray into uncharted territory by making films with the dreaded and frightening PG rating (I’m sure rage-fuelled parents picketed their studios immediately). The first of these movies was The Black Hole but originally it was going to be the film I’m reviewing today, the vastly underrated Watcher In the Woods. 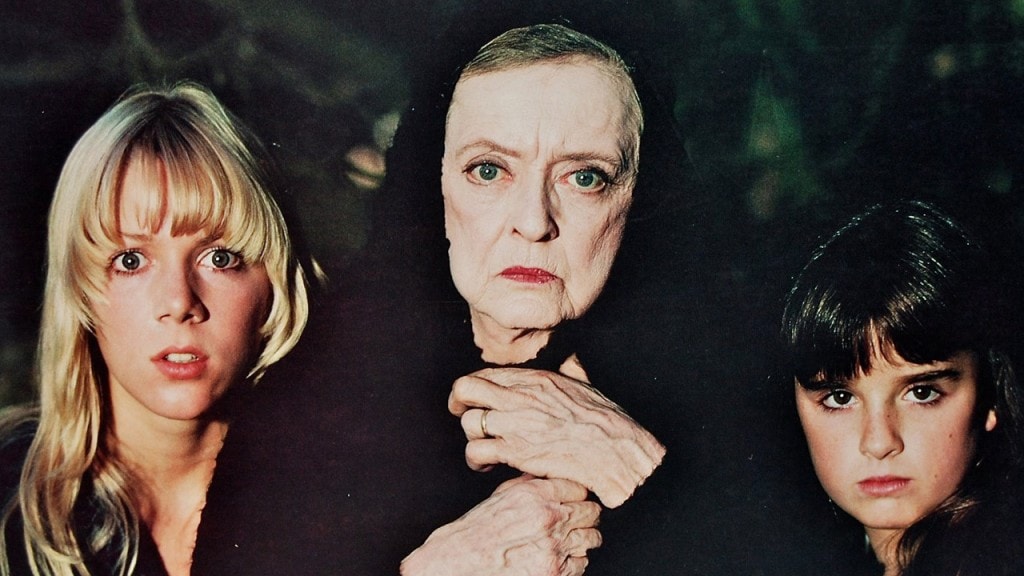 Watcher’s story is a fairly typical one, The Curtis family decides it’s time to move from the big city a smaller locale and what doesn’t say small and quaint like a spooky house in the woods. The house they set their sights on is owned by the equally spooky Mrs. Aylwood (played by Bette Davis!) who’s very particular about who she’ll let occupy it. Luckily for the Curtis’ Mrs. Aylwood sees something in their daughter Jan, mostly that she’s the spitting image of her daughter Karen who mysteriously disappeared 30 years prior. But Mrs. Aylwood isn’t the only one who’s seeing things, from the minute she enters the house Jan starts feeling strange sensations, as if there’s a presence looming over her that’s coming from the surrounding woods (a watcher… in the woods perhaps?). Now here come even more fun tropes! Jan’s younger sister (played by former child actress now Demi Moore look-alike/The Real Housewives of Beverly Hills star Kyle Richards) begins to hear strange voices and starts writing things backwards on dusty glass, mirrors shatter on their own and show images of a blind-folded girl calling out to Jan “Jaaaaaaaaaaan help me, help meeeeee…..” 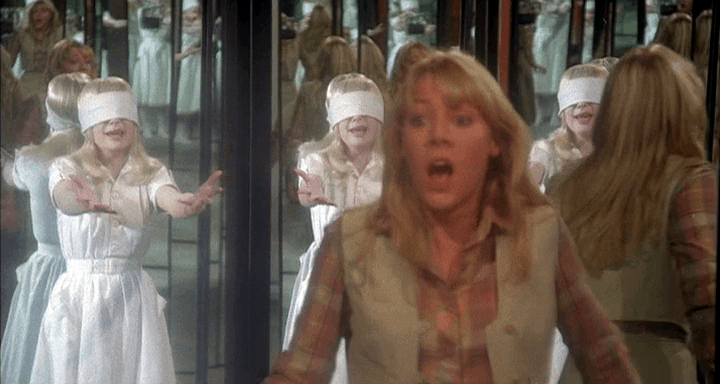 Mrs. Aylwood creepily watches Jan, as if she has something to hide which of course she does… the story of how her daughter disappeared. Now did spooky old lady Bette Davis have anything to do with it I’m sure you’re wondering, well unless you want the rest of the movie spoiled I’d say stop reading now. 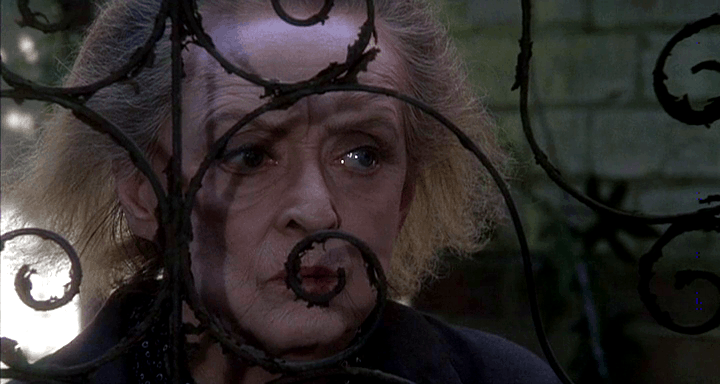 before Bette Davis gets you!

Now Watcher has a bit of a notorious production history, originally pitched as being Disney’s answer to The Exorcist it had to go through many many many re-writes before it was deemed suitable for release. When it finally did get released it was hastily pulled from theatres after only a week, why? Quite possibly the least satisfying part of the whole movie; the ending. So getting back to Mrs. Aylwood and her missing daughter, Jan finds out that Mrs. Aylwood didn’t have anything to do with Karen’s disappearance, in a freak accident Karen literally disappeared out of thin air as part of a bizarre ritual carried out by her friends in the local church, somehow the “friendship circle” they formed around Karen combined with a solar eclipse plus lightning striking the church caused an interdimensional rift that snatched Karen out of this world and swapped her with The Watcher. But what IS the Watcher you ask, well if you saw it during it’s first run it was this. 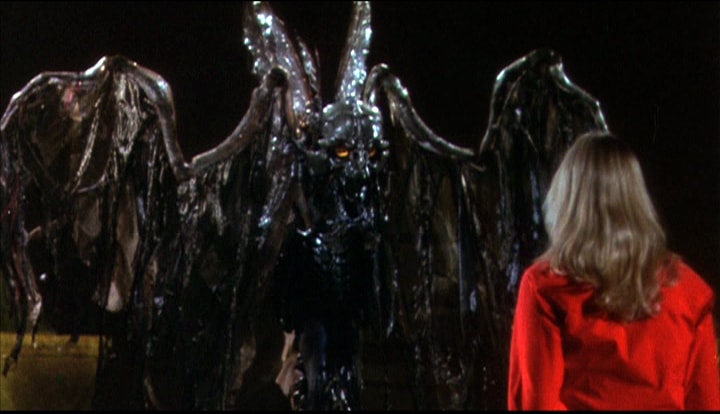 That’s right, A GIANT SCARY ALIEN which receives no foreshadowing whatsoever when it finally shows up. Having been stuck in this world since the ritual it’s spent the whole movie trying to communicate to Jan that she needs to complete the ritual that was left unfinished 30 years earlier in order for it and Karen to return to their respective worlds. The Watcher’s appearance comes after Jan has gathered all of Karen’s childhood friends (now adults) in the same church where she originally disappeared to recreate the ritual, The Watcher approaches Jan and wraps her in it’s giant bat-like wings and transports her to the dimension that Karen has been trapped in all those years. Now at this point there was supposed to be a big, special effects heavy sequence that takes place in the Watcher’s world that would offer a lot more explanation as to what the hell really happened but unfortunately the scene was scraped before they completed all the necessary visual effects (allegedly Disney wanted to rush the film’s release to coincide with the 50th anniversary of Bette Davis’ career in show business and didn’t have sufficient time to finish it) so instead we get a much less exciting scene of the adults that participated in original ritual arguing that they’ve all made a terrible mistake when suddenly *pop* Jan AND Karen (who hasn’t aged a day) return in a ball of light. Jan gives a very brief explanation as to what happened, Karen and her mother re-unite and everyone is happy, end of movie.

Ignoring the obvious solution they decided to hire dozens of writers to try and come up with an entirely new ending that would hopefully resolve all the issues everyone had with the original. While not as fun, the new ending does however feature a much better explanation of what happened to Karen via The Watcher simply possessing Jan’s younger sister and having her give a big a explanatory speech, oh and also The Watcher isn’t an H.R. Giger monstrosity anymore, it’s this:” 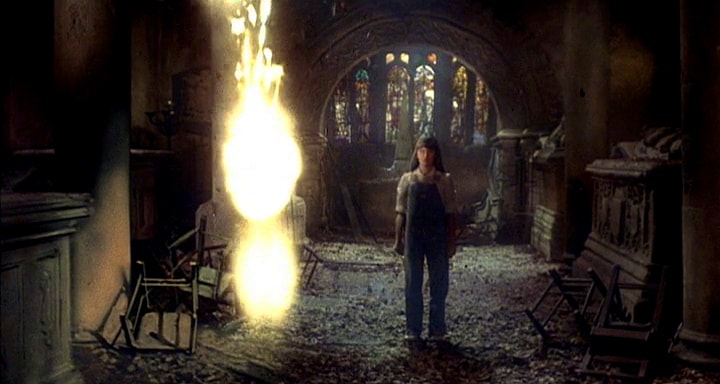 meet the new and improved watcher, a glowing pillar of light!

So maybe Watcher doesn’t have the most original plot in the world, we’ve all seen the same story told over and over again under different titles but of course any old story can seem fresh again when it’s told right and that’s what director John Hough accomplished with this film. Now it may not surprise you to learn how good this is if you look at the previous films of director John Hough, the two of which most would likely be familiar with are Legend of Hell House and Escape to Witch Mountain. Legend was Hough’s fourth official feature and the one he personally considers to be his best. 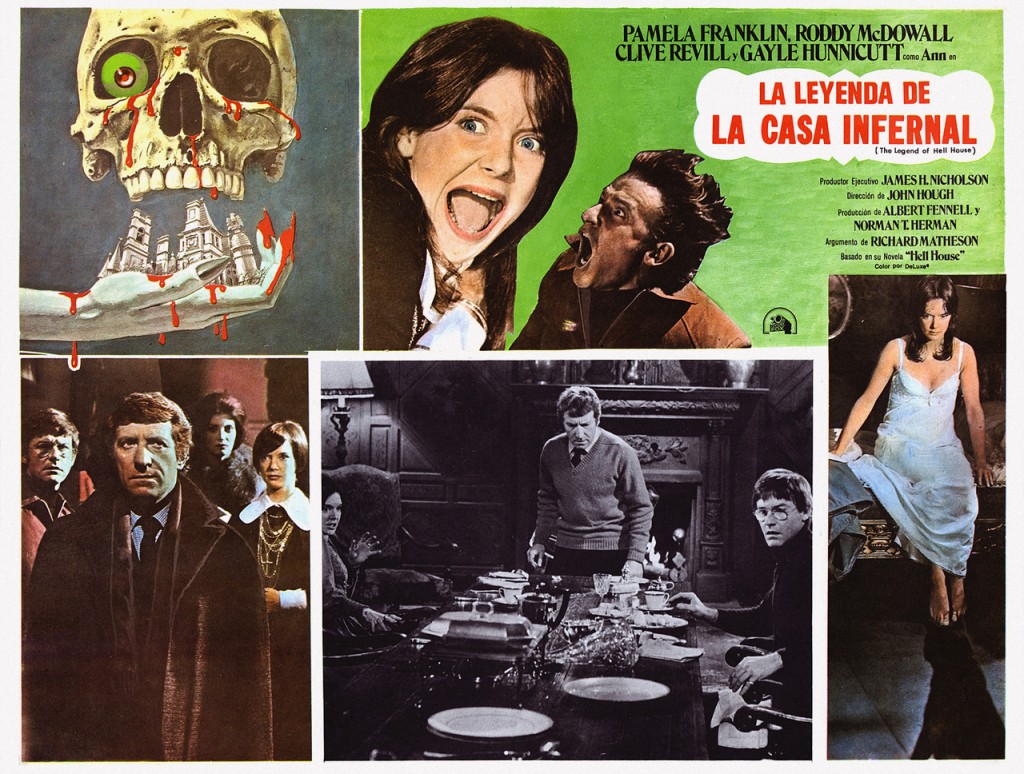 and I would not argue

Regarded by some as a rip-off of The Haunting, Legend is much more than that, based on a novel by Richard Matheson (who also wrote the screenplay) Hough pulls out all the stops on this one, it’s it’s full sex, violence, crazy close-ups, low-angles, suspense and jump-scares. Surprisingly enough someone at Disney saw it and said “this is the guy who we need to direct our next kids movie!”. Now it’s been a long long time since I last saw Escape to Witch Mountain (undoubtedly it must have played on the Family Channel sometime in my youth) but from what I remember I definitely liked it a lot, as I’m sure kids the same age as I was at the time did when it originally premiered. Now presumably Hough was hired for Watcher In the Woods because of his ability handle a film with a lot of fun special effects which are just as abundant in Escape as they were in Legend of Hell House albeit in a vastly different setting. 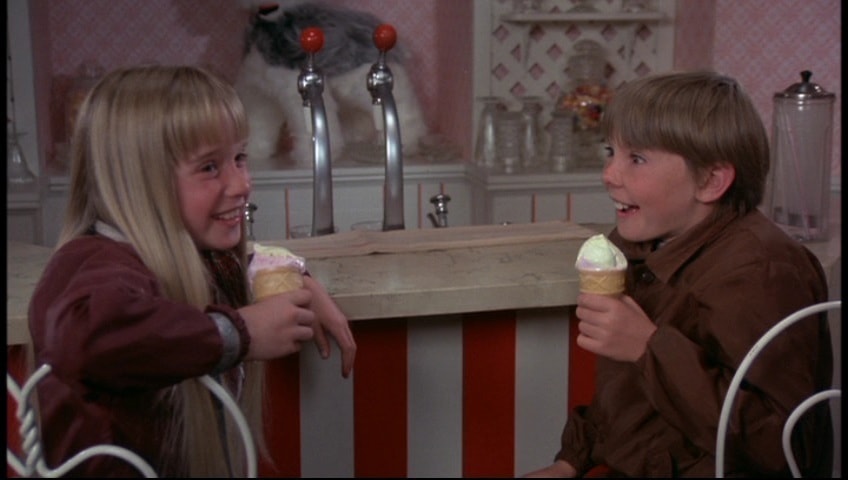 Escape started a working relationship with Disney that would lead Hough to direct several projects for them, the third of which being Watcher In the Woods. Watcher works especially well because it contains both the well-directed and scary aspects of Legend plus the fun family-friendly accessibility of Escape. Now to say Watcher is entirely family-friendly is a bit of a stretch, in fact Disney specifically advertised that it wasn’t recommended for small children; because, well Watcher is scary. Though there’s a couple jump scares Hough relies mainly on suspense to keep the audience on their feet and just because it’s “for kids” doesn’t mean Hough doesn’t go out of his way to shoot it just as wackily as he would one of his more traditional horror films. Now do I wish that Watcher In the Woods was more in the same vein as something like Legend of Hell House well as an avid horror fan who hasn’t been a kid for some time now of course I do but adults were never the intended audience of the film. All and all Watcher In the Woods is a really well made and fun film that both kids and horror die-hards should be able to appreciate.