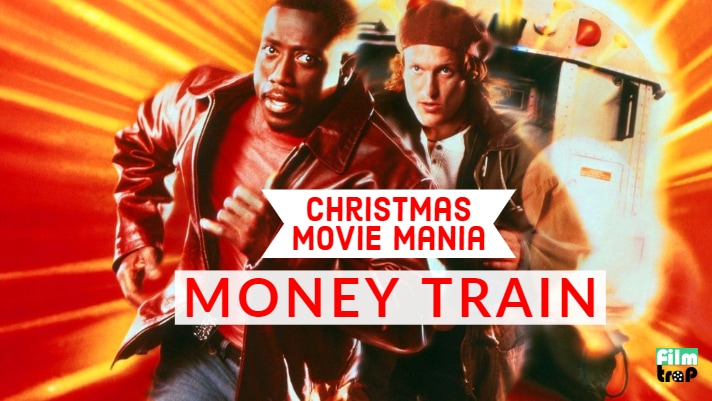 My eyes lit up when I saw Money Train on the shelf of Bay Street Video’s Christmas section. “This takes place on Christmas?” I whispered excitedly under my breath. I had never seen it on any X-Mas Movie Lists before, and while it was a film I knew by name (having been battered by trailers during its release), I had never actually sat down and watched. Well, today was the day!

Money Train plays like a 70s era hang out movie lazily re-written into a 90s action blockbuster. It’s got all the expected beats, but none of the urgency of the heavy hitters. The studio must have been clamouring for more Woody Harrelson and Wesley Snipes pictures after White Men Can’t Jump (1992), because there teamed up here again as two transit cops (who are also brothers) that decide to rob the titular vehicle. One would expect such a heist would be the centrepiece of the picture, but most of the running time is spent watching them crack jokes, vie for the affection of the new cop on the force played by Jennifer Lopez, and bumping into a rogue arsonist (Chris Cooper) who likes lighting subway employees on fire. The latter has nothing to do with the Money Train other than to give the affable actors something to do.  Eventually, with thirty minutes left to go, the robbery is pulled off in a scene that made me wistful for the days where model trains crashed into other model trains. me  Director Joseph Reuben (Dreamscape) knows exactly how to move the camera in his best imitation of Speed’s Jan De Bont.

But how much Christmas does it actually contain? A surprising amount it turns out. Screenwriter Doug Richardson was obviously trying to cash in on the Shane Black magic, so the story is littered with references to the season in dialogue and set-design. Characters talk about getting presents for each other and every scene outdoors features multiple Christmas trees lit up.  It never actually impacts the plot in any way and the story does bleed into New Years, but the Christmas feel never really goes away. I’m just glad that there’s still Christmas set action films that I haven’t discovered. What will I discover next? Hard Rain takes place during the holidays? Chilld Factor!?

Money Train: The perfect film for your Holiday get together, because no one will remember it, and everyone will have fun with it (and forget it by the next day)