“It’s a truth, universally acknowledged, that teenagers are fucking idiots.”

Jane Austin said that, and it still rings true today. It’s every human being’s God-given right to be a moody asshole, but that doesn’t make you smart. Brooding all the time doesn’t give you layers, in fact the very opposite, because it’s only when you learn new things, or develop a variety of skills that you can become interesting, and you can’t do either of those things by moping around all the time.

Chances are you’ve noticed a trend coming out of Hollywood in the last few years. Big, popcorn, blockbusters are trying to show how serious minded they are, by getting bleak as hell. Hollywood is telling us that fun, action movies aren’t supposed to be fun. That if, somehow, we make the mistake of being entertained, we’re not taking this shit serious enough.

I’m gonna assume that some blogger has already spotted this phenomenon and labelled it “the Dark Knight effect,” because I’m pretty sure it’s a result of the box office success of the Nolan Batman series. While I loves me some Dark Knight, I do regularly find myself saying, “but what horrors has it wrought?”

It’s no secret that the Hollywood studio system is not run by artists trying to change the world through the magic of motion pictures. It’s a big business, run by people who aren’t so much film fans as they are fans of money. When businessmen see something that works, they milk that cash cow until they’ve squeezed every last dollar out of its chafed cash-udders.

When Christopher Nolan’s dark, gritty take on Batman made a kajillion and seven dollars, everybody wanted a piece-o-dat (or “piece of that” if you aren’t currently wearing basketball shorts). So they said, “hey, people like dark and gritty, we’ll make dark and gritty everything! We’ll make a dark, and gritty Superman reboot, then we’ll cross promote it with new Dark N’ Gritty flavoured Doritos, and Dark and Gritty Tampons! …hmm… maybe not gritty on the tampons.”

What they forgot was that Batman has been a dark and gritty character since at least the 80s. So an edgier take on a Batman movie wasn’t a reimagining. It was just giving fans what they wanted.

In theory, I can see why a similar toned Superman film could’ve worked. Superman haters have been saying for decades that he’s a lame and bland character. He’s too powerful and that makes him boring. He’s dated, his glasses are a stupid disguise, his cape is balls, and what’s the deal with the underwear outside of his pants?

While I’m willing to concede that Superman CAN be boring (also that his cape is balls, but it’s 2017, UP, UP AND AWAAAAAYYY!!!), I completely disagree that Superman is a boring character. The problem is that this idea surrounding Supes as being boring results from poor writing, and not his perceived bland, goody-two-shoes character. So, of course, turning the character dark doesn’t automatically flick a switch and make him interesting. Also his glasses aren’t a stupid disguise. YOU’RE a stupid disguise!

I’ll back this up with some recent comic book history. The Death of Superman storyline in the 90s was so successful that it pretty much saved DC from bankruptcy. At the time, it was everywhere. You couldn’t walk into a comic shop without being crushed under issues, cross-overs, cardboard standees, and T-shirts. It’s probably one of the most financially successful comic events ever. As time has passed, and the smoke has cleared, in hindsight a lot of people have realized that it’s also one of the dumbest.

The Death of Superman event was also, for most of the current crop of “nerd culture” filmgoers, their first experience with the character of Superman, outside of the Richard Donner films. Again, while Death of Superman was a big financial hit, it is widely considered to be a cobbled together, shameless cash grab, that is responsible for “killing death,” in the industry.

When Superman died, then was resurrected within a year, it made all comic book deaths trivial, and easily reversed. Even secondary characters whose deaths were pivotal to the development of superheroes. Gwen Stacy from Spider-Man, and Jason Todd from Batman, being the most iconic examples of this. The next time a character dies in a comic book and you think, “pshht! We’ll see how long THIS lasts,” you can thank Death of Superman for your complete indifference to tragedy in the funny pages.

A big, stupid, cash grab featuring the obviously short-term death of Superman. Sound like any recent summer blockbusters to you?

While Batman V. Superman: Dawn of Brooding made a shit ton of money, it is almost universally considered a really stupid movie. While I haven’t seen it or the previous Man of Steel, I’ve heard enough about both, that I can safely say, as both a Superman and a Batman fan, I hate both Zack Snyder movies.

The weird argument I’ve heard from people surrounding the recent DC movies is, “if you’re a fan of these characters, how can you avoid seeing these movies?” Whereas it’s exactly BECAUSE I’m a fan of these characters that I avoid seeing these movies. That Superman you see in the Zack Snyder movies isn’t Superman. In fact Mr. Chiseled-Jaw McFrowny Face has been stripped of everything that I love about Superman.

Superman is supposed to represent hope, an ideal morality to strive for even though you’re not all powerful. Superman inspires the characters of his world to be better people, and in so doing,  he inspires the reader to try to better themselves as well. It makes absolutely no sense to attempt to turn his fun adventures into harsh, scowl fest, Jesus analogies. That being said, if a brilliant team of creatives had pulled it off right I would’ve applauded them.

Which brings us to the Star Wars in the room. 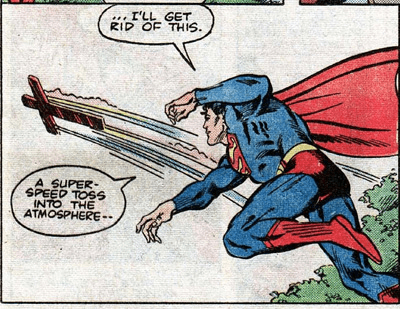 In all fairness, Jesus wouldn’t be a big fan of crosses either.

Unlike, Batman V. Superman: Downer of Jesus, the trailers for Star Wars: Rogue One looked promising. The previous year’s The Force Awakens had reminded me that laser fights in space could be a lot of fun. You can say what you want about it’s flaws, but it was a rollicking space adventure, filled with charismatic characters, and exciting situations.

I had no reason to believe that when I went into the theatre for Rogue One I wasn’t in for more of the same. I left the theatre knowing I had just seen the worst movie I would see in 2016, and my hatred for it only intensifies whenever I hear somebody say how great it is. 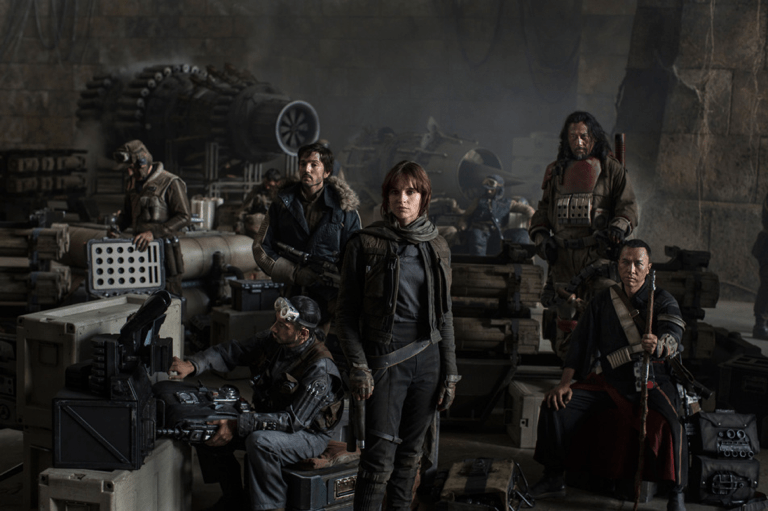 Look at how much fun we’re having.

Now at this point I’ve seen a few YouTube videos going into detail about all the flaws of Rogue One so this is pretty well trodden territory. If you’re interested, Red Letter Media’s Half in the Bag review, and Jenny Nicholson’s Everything Wrong With Rogue One cover almost everything. If you’re a die hard Star Wars defender, you’re probably already seething with anger, and preparing a defence right now.

However, so far, in regards to the above mentioned videos, the comments I read in Rogue One’s defence have ranged from “fuck you! It IS fun,” to “Darth Vader was awesome!” To these points I state that saying someone’s valid criticisms don’t count because the movie in question “WAS fun,” or “WAS awesome,” is not an argument. It’s just playground, “no YOU’RE dumb,” cyclical thinking. It goes nowhere.

My point is, I have yet to hear one genuine argument in defence of Rogue One, either from friends I’ve talked to about it, or the vast amount of Internet comments on it.

So I’m not gonna bother listing Rogue One’s flaws, as generally they seem to be the result of a cobbled together production, plagued with last minute re-writes and re-shoots. I will say however that I’m curious to see how long it takes the public zeitgeist to admit that Rogue One is just as bad as the prequels. I’m expecting it to take a little longer to sink in than it did with The Phantom Menace, because this time it looked and sounded like the Star Wars universe that we know and love, and also “hey look there’s C-3PO and R2-D2, and the Cantina bullies,” it must be good right? If it was bad it wouldn’t keep winking at the fans!

I’m genuinely sorry that for some reason I just can’t let my hatred of this movie go. It’s just that after the fun of The Force Awakens and those super cool trailers (which featured a lot of footage that didn’t make it into the movie due to all those re-shoots), I feel like I got tricked, when normally I have a pretty good radar for seeking out films I’ll enjoy in the theatre. It was the same thing for the Ghostbusters remake. Though, really, I should’ve seen that one coming.

I’m starting to get a little repetitive with my Hollywood bashing in these FilmTrap essays, and that’s too bad. Some of my favourite movies have come out of the Hollywood system.

If you want a movie that successfully pulled off everything that Rogue One failed at, watch Starship Troopers. It’s a gritty, space-war movie, that features a protagonist who grudgingly finds their destiny, after experiencing love and loss, all set against the backdrop of looming fascism, while simultaneously being a fun and exciting action-adventure. Starship Troopers was made within the Hollywood system, the difference being the studio stepped back and let the filmmakers create their vision, without constantly meddling, and testing, and reshooting.

What bums me out is that movies like Starship Troopers could never get made today. Of course a remake is in the works, but how much do you wanna bet it’ll be the typical mediocre, neutered, PG-13, forgettable remake stripped of all the satire and cleverness that made the original great in the first place. And don’t give me that bullshit, “we’re gonna stay closer to the source material this time,” argument because I’ve read the book, and it’s barely a story. It’s really more Robert Heinlein’s novel-length rant about why he thinks a completely military run global government would be a better one. Heinlein was a great sci-fi writer, but he was also great at being nuts.

But I’m getting off topic here.

All-in-all Hollywood goes through trends based on what they think will sell. Lately I find myself just angrily trying to wait out all the current trends. Giant, ongoing cinematic universes is one of them. As it stands right now it looks like there are going to be Marvel movies and Star Wars movies coming out every year until long after I’m dead. The dark toned, dumb movies are an offshoot of this. With a post-apocalyptic, unnecessarily R-rated Wolverine movie the next likely culprit to fuel my increasing Hollywood directed anger.

You can say, “if you don’t like these movies don’t go see them,” and you’re right, but most of the time I don’t. My problem is that in order for studios to stop making these movies and start making different, maybe even better movies, I need you to stop going to see them too. It’s only when on mass that we stop being Hollywood’s sucker, that the beast will change it’s stripes. Then it’ll have to figure out some new way to lure us in and devour us. I doubt that’ll happen anytime soon though, as most people seem pretty psyched about this new Wolverine movie, even though it’s from the same filmmaker who made the last Wolverine movie to the collective “meh” of most filmgoers, but hey!