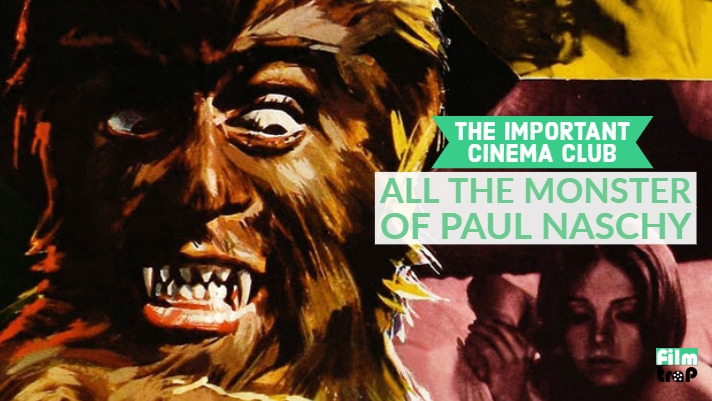 We discuss the career of Paul Naschy, the Spanish actor/writer/director that played a werewolf, a vampire, a mummy, satan, and every other monster in such movies as FRANKENSTEIN’S BLOODY TERROR (1968), THE WEREWOLF AND THE VAMPIRE (1971) WOMAN and HORROR RISES FROM THE TOMB (1973).

On this week’s Patreon episode, we watched the hilarious SCARY MOVIE 2 (2001)

For more information on Paul Naschy, make sure to check out the book by Troy Howarth HUMAN BEASTS:

Pilfering gypsies take refuge in a crypt, unwisely removing a silver cross from the corpse of Count Imre Wolfstein and unleashing the curse of the werewolf! Modern descendant Waldemar Daninsky realizes he must hunt down the preying beast, but in the midst of his brave efforts, is bitten and infected with lycanthropy. Desperate for a cure, Waldemar calls for the help of a strange doctor and his alluring wife who happen to be bloodthirsty vampires!

While searching the countryside for the grave of supposed vampire Countess Wandesa Dárvula de Nadasdy (Paty Shepard), students Genevieve (Barbara Capell) and Elvira (Gaby Fuchs) meet an amiable local named Daninsky (Paul Naschy) who offers to help them look. Not knowing he’s a werewolf, they accept, and Daninsky leads them to the tomb where they accidentally revive the sleeping vampire. She attacks, and Daninsky and Elvira cooperate in trying to stop her — falling in love in the process.

In 1454, in France, the sorcerer Alaric de Marnac is decapitated and his mistress, Mabille De Lancré, is tortured to death having been accused of witchcraft, vampirism and lycanthropy. Before they die, they curse the next generations of their executioners. In the present days (in the 70’s), Hugo de Marnac, Sylvia and their friends, Maurice Roland and his beloved Paula, go to a séance session, where they evoke the spirit of Alaric de Marnac. They decide to travel to the Villas de Sade, a real estate of Hugo’s family in the countryside, to seek a monastery with a hidden treasure. They find Alaric’s head and the fiend possesses them, bringing Mabille back to life and executing the locals in gore sacrifices. After the death of her father, Elvira recalls that he has the Thor’s Hammer amulet hidden in a well; together with Maurice, they try to defeat the demoniac Alaric de Marnac and Mabille.

An ex-convict, troubled by dreams that he strangles women, is hired as the caretaker on an estate owned by three very strange sisters. Soon after his arrival, a serial killer begins slaughtering blonde, blue-eyed women – and leaving their eyeballs in a bowl of water.