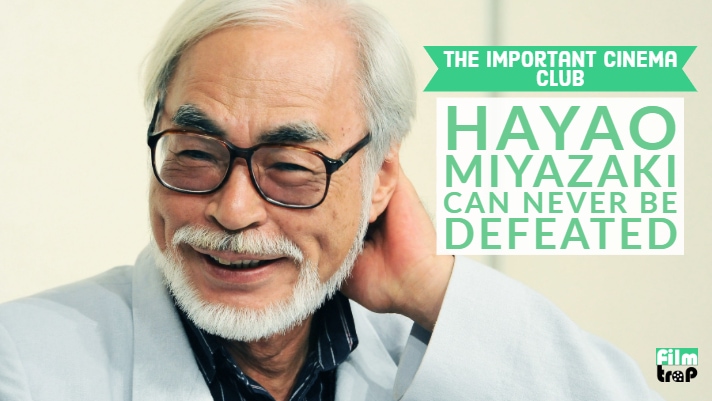 We discuss the work of Japanese Writer/Director Hiyaho Miyazaki and his films My Neighbor Totoro, The Castle of Cagliostro and Spirited Away.

On this week’s Patreon, we discuss our favorite Oscar moments. Become a member for $5 a month for an exclusive episode every or become a $10 subscriber for that and a monthly newsletter delivered every month to your physical mailbox.

In this animated feature by noted Japanese director Hayao Miyazaki, 10-year-old Chihiro (Rumi Hiiragi) and her parents (Takashi Naitô, Yasuko Sawaguchi) stumble upon a seemingly abandoned amusement park. After her mother and father are turned into giant pigs, Chihiro meets the mysterious Haku (Miyu Irino), who explains that the park is a resort for supernatural beings who need a break from their time spent in the earthly realm, and that she must work there to free herself and her parents.

When master thief Lupin III (Yasuo Yamada) discovers that the money he robbed from a casino is counterfeit, he goes to Cagliostro, rumored to be the source of the forgery. There he discovers a beautiful princess, Clarisse (Sumi Shimamoto), who is being forced to marry the count so he can find the legendary treasure of Cagliostro. In order to rescue Clarisse and foil the count, Lupin teams up with his regular adversary, Inspector Zenigata, as well as fellow thief Fujiko Mine.

This acclaimed animated tale by director Hayao Miyazaki follows schoolgirl Satsuke and her younger sister, Mei, as they settle into an old country house with their father and wait for their mother to recover from an illness in an area hospital. As the sisters explore their new home, they encounter and befriend playful spirits in their house and the nearby forest, most notably the massive cuddly creature known as Totoro.