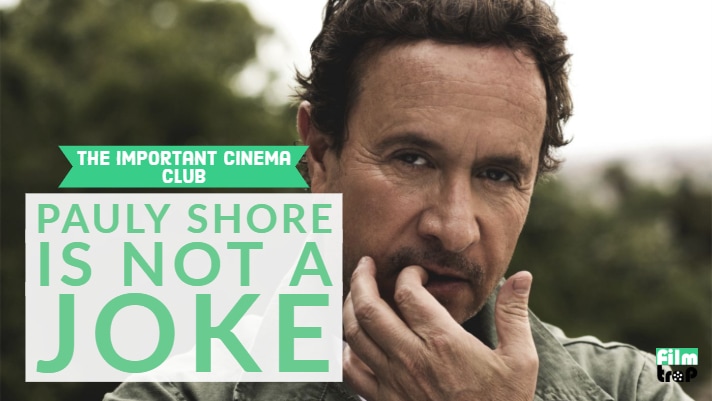 We discuss the artistic career of actor/director/entertainer Pauly Shore and his films Encino Man, Son in Law, Bio-Dome and Pauly Shore is Not Dead.

Become a Patreon subscriber for $5 a month and get an exclusive episode every week! This week on our Patreon we discuss Dana Carvey in Master of Disguise.

California teen Dave Morgan (Sean Astin) is digging a pit for a pool in his backyard when he happens upon a caveman frozen in a block of ice. Aided by his goofy friend Stoney (Pauly Shore), Dave transports their discovery to his garage, where the Neanderthal thaws and is revived. When Dave and Stoney find the living and thoroughly bewildered caveman, they attempt to pass him off as a foreign exchange student named Link (Brendan Fraser), resulting in many misadventures.

Bud (Pauly Shore) and Doyle (Stephen Baldwin) get simultaneously dumped by their eco-conscious girlfriends, Monique (Joey Lauren Adams) and Jen (Teresa Hill), in the middle of the desert. Needing a bathroom, the two friends enter what they think is a mall but soon realize is a high-profile, secure biological experiment. As they engage in a year-long battle with Dr. Faulkner (William Atherton) and the other scientists, Bud and Doyle are forced to confront the recklessness of their behavior.

Hollywood comedian and actor Pauly Shore loses everything: his house, nobody in Hollywood wants to represent him, he moves back home with his mom and is now parking cars at The Comedy Store. Then one night when he’s up in his mom’s loft, a dead famous comedian appears who tells Pauly to kill himself cause he’ll go down as a comedic genius who died before his time. Pauly then fakes his own death, and the media goes crazy. Celebrities are talking about him on MTV and girls are fighting over him on Jerry Springer. It’s everything that he wanted. His plan worked. A week or so later, the L.A.P.D. is tipped off about his whereabouts and they break down the door of the seedy motel room in which he’s hiding out and throw him in Los Angeles County’s celebrity wing.