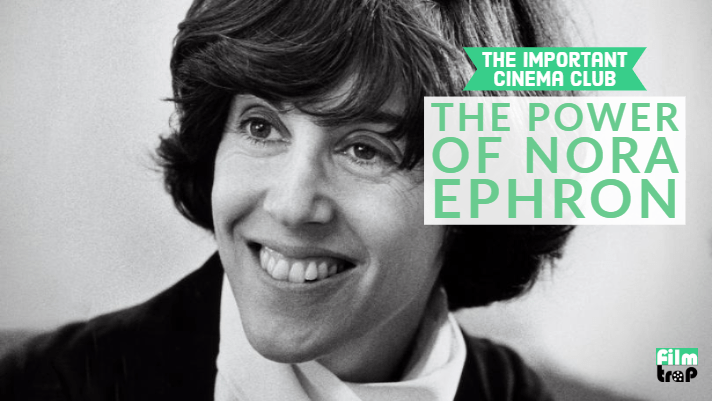 We discuss the career of Writer/Director Nora Ephron AKA The Queen of Romantic Comedies and her films SLEEPLESS IN SEATTLE, YOU’VE GOT MAIL and HEARTBURN

Plus, a SUMMER MOVIE PREVIEW!

Become a Patreon subscriber for $5 a month and get an exclusive episode every week! This week on our Patreon we discuss Andrew “Dice” Clay and his film THE ADVENTURES OF FORD FAIRLANE.

In 1977, college graduates Harry Burns (Billy Crystal) and Sally Albright (Meg Ryan) share a contentious car ride from Chicago to New York, during which they argue about whether men and women can ever truly be strictly platonic friends. Ten years later, Harry and Sally meet again at a bookstore, and in the company of their respective best friends, Jess (Bruno Kirby) and Marie (Carrie Fisher), attempt to stay friends without sex becoming an issue between them.

After the death of his wife, Sam Baldwin (Tom Hanks) moves to Seattle with his son, Jonah (Ross Mallinger). When Jonah calls in to a talk-radio program to find a new wife for his father, Sam grudgingly gets on the line to discuss his feelings. Annie Reed (Meg Ryan), a reporter in Baltimore, hears Sam speak and falls for him, even though she is engaged. Unsure where it will lead, she writes Sam a letter asking him to meet her at the Empire State Building on Valentine’s Day.

Rachel Samstat (Meryl Streep), a New York food critic, beds Mark Forman (Jack Nicholson), a Washington, D.C., newspaper columnist. The two fall in love, and Rachel relinquishes her job and relocates to be with a man who views himself as unfit for marriage. They try to build a life together — literally — as they struggle with the construction crews renovating their home. When Rachel gets pregnant, Mark is enthusiastic, but then soon begins doubting whether he could be a family man.