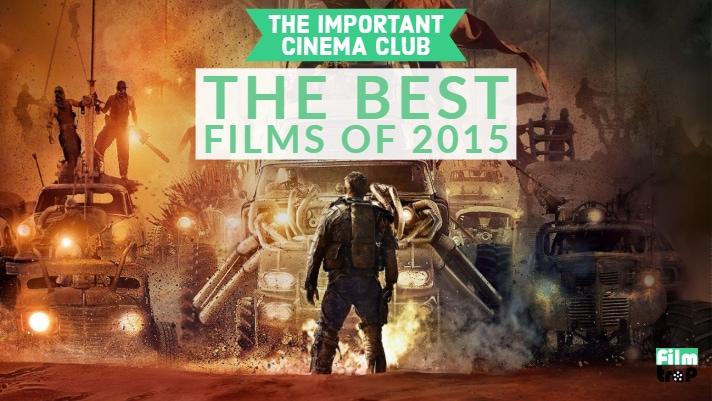 I’ve never put together a ranked BEST FILMS OF THE YEAR list before, but in the academic and studied spirit of the podcast, me and Will Sloan sat down for endless torture filled months to compile the ULTIMATE two lists of MUST SEE films of 2015. We discuss the validity of making lists, why no one has seen any of the films I’ve chosen and the future of film in 2016 (*SPOILER* We have no idea what’s coming out in 2016)

All that and more on the IMPORTANT CINEMA CLUB PODCAST!

Also, don’t forget to check out a comprehensive BEST OF list collection of Toronto Film Critics at TORONTO FILM REVIEW

Become a Patreon subscriber for $5 a month and get an exclusive episode every week! On this week’s Patreon episode, we talk Robert Zemeckis and Who Framed Roger Rabbit?

Years after the collapse of civilization, the tyrannical Immortan Joe enslaves apocalypse survivors inside the desert fortress the Citadel. When the warrior Imperator Furiosa (Charlize Theron) leads the despot’s five wives in a daring escape, she forges an alliance with Max Rockatansky (Tom Hardy), a loner and former captive. Fortified in the massive, armoured truck the War Rig, they try to outrun the ruthless warlord and his henchmen in a deadly high-speed chase through the Wasteland.

When his cover gets blown, a Hong Kong cop (Wu Jing) lands in a Thai prison where the warden (Zhang Jin) works with a criminal mastermind (Louis Koo) to harvest organs.

A bounty hunter (Michael Fassbender) keeps his true motive a secret from the naive Scottish teenager (Kodi Smit-McPhee) he’s offered to serve as bodyguard and guide while the youth searches for his beloved in 1800s Colorado.