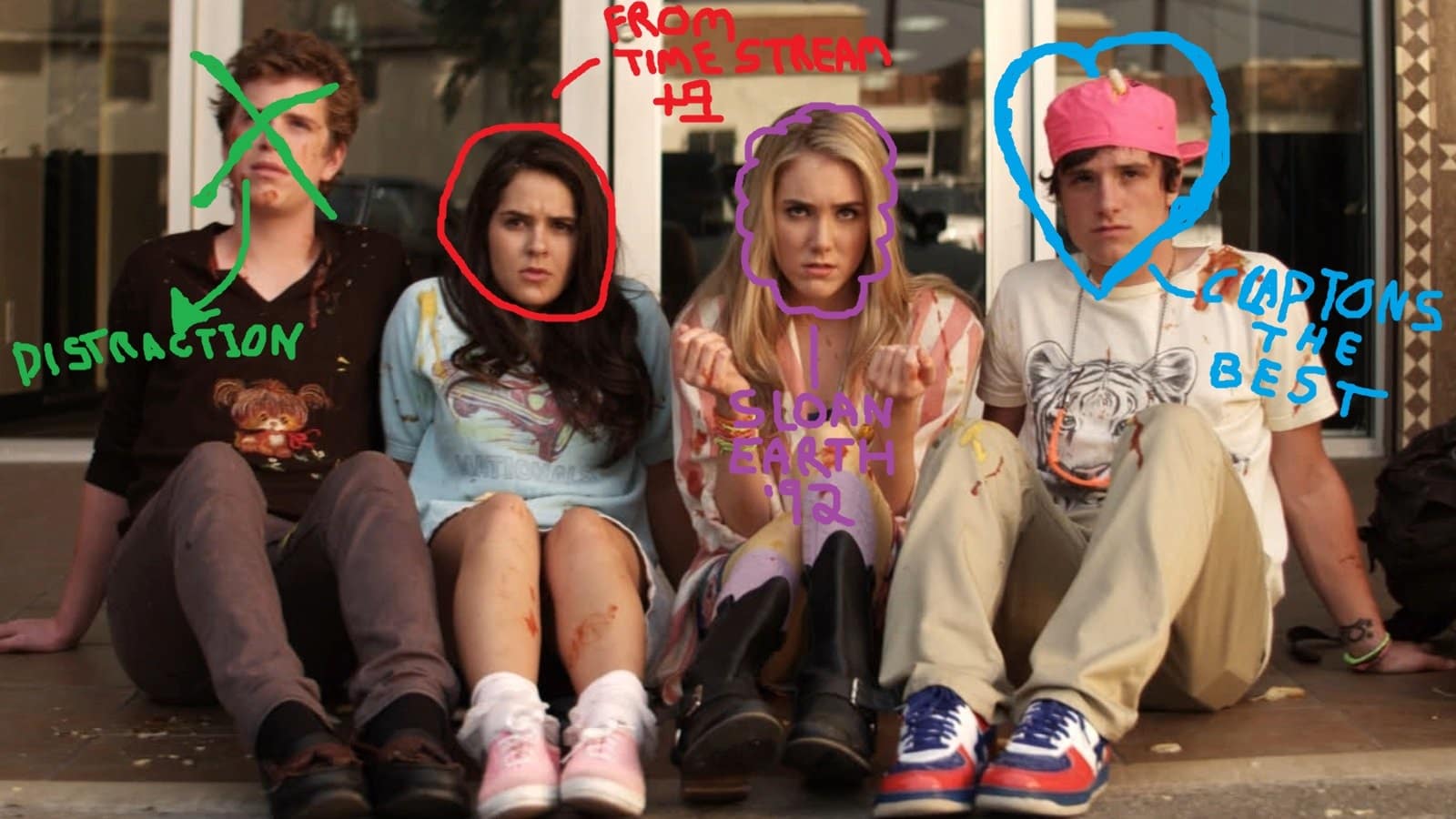 I didn’t love DETENTION the first time I saw it.

I probably got a little too excited when I heard it was going to be a John Hughes style high school comedy married to Joseph Kahn’s hyperactive directorial style, slasher movie tropes, and time travel craziness. I was a big fan of the over the top zaniness of  Kahn’s  feature film debut TORQUE, and when I read him describe the stunts in TORQUE in relation to Michelle Yeoh’s bike train jump in Jackie Chan’s POLICE STORY 3: SUPERCOP, I realized he was a man after my own heart. Kahn funded DETENTION out of his own pocket and it was guaranteed to be an uncut artistic mind blower.

And then I watched it. And it didn’t instantly click with me.

I wasn’t sure why.

“Oh man! Did you see the DENTION trailer!!!???” friends kept messaging me “It looks like something you would make!”

At first, I shrugged off those assertions with a quiet whisper of “It’s not like me! I’m a pure original!”,  but it didn’t take me long to realize everyone was right. DETENTION was the same mixture of  anything goes splatter comedy, camera gymnastics, and exposed beating heart that I have been writing and shooting in some no-budget forum since the day I picked up a camera – except in DETENTION it was done right. The film mirrored my obsession’s so closely,  I had been unconsciously over critical of it: Some of the acting was a little wonky, a few jokes landed flat, the use of digital blood was a little distracting , and my biggest problem of all…

Look, I’m not Neil deGrasse Tyson. I don’t want to suck the fun out of everything. I understand that time travel doesn’t have to be logical as long as it makes emotional sense. DOCTOR WHO does it all the time. THE TERMINATOR doesn’t care. LOOPER. Well, don’t get me started on LOOPER.

I love time travel. It’s one of my favorite sub-genres for the simple reason that it offers infinite possibilities, but also carries a series of checks and balances. The best stories are the ones that that have fun with the storytelling mechanisms the concept offers, but then reveals the consequences of that fun – you don’t realize you’ve been experiencing a puzzle until every piece locks into place

DETENTION doesn’t care about the logic of its time travel because it’s all in the service of the jokes. I get that, but man, it still bugged me. The rest of the film was so dense, so layered, and so well thought out, that it felt like I was missing something. I knew that I wasn’t, yet I couldn’t shake that feeling.

In anticipation of BODIED having its premiere (programmed by my pal Peter Kuplowsky at Midnight Madness!), I decided to give DETENTION another watch.

For some reason, this time everything clicked. My mind went into overdrive. It all became clear to me.

This will make zero sense if you aren’t obsessively familiar with DETENTION. Go watch it now. Come back.

I don’t believe Joseph Kahn or co-writer Mark Palermo thought of any of this nonsense. They had bigger concerns like pacing, comedy, drama and making a damn movie. This ‘article’ is the work of someone who had zero involvement with the complexities of bringing DETENTION to life.

I am not adept at mathematics or science in the slightest. If you find a fatal flaw in my logic, you’re probably right. Your No-Prize is in the mail!

These rules apply only DETENTION. Other films may have a completely different set of rules.

THE HEAVY LOAD OF THE MULTIPLE TIME STREAMS THEOREM

If you go back to the past and kill your grandfather, from the point of your arrival, you are creating a new time stream.  If you kill your grandad (poor guy) then switch your time travel machine to jump FORWARD in time, you will find yourself not where you came from, but from the future you have created by your senseless murder (unless he was a bad dude)

Here’s an illustration I made in  PAINT (rip) to illustrate this point: 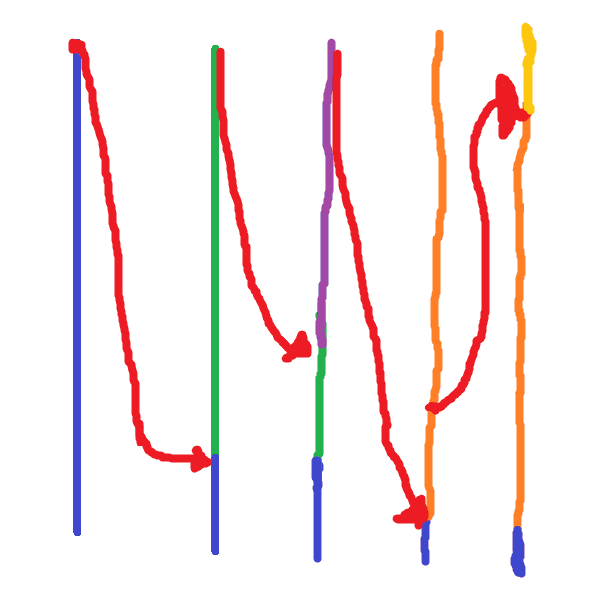 YOU WILL ALWAYS BE ALONE 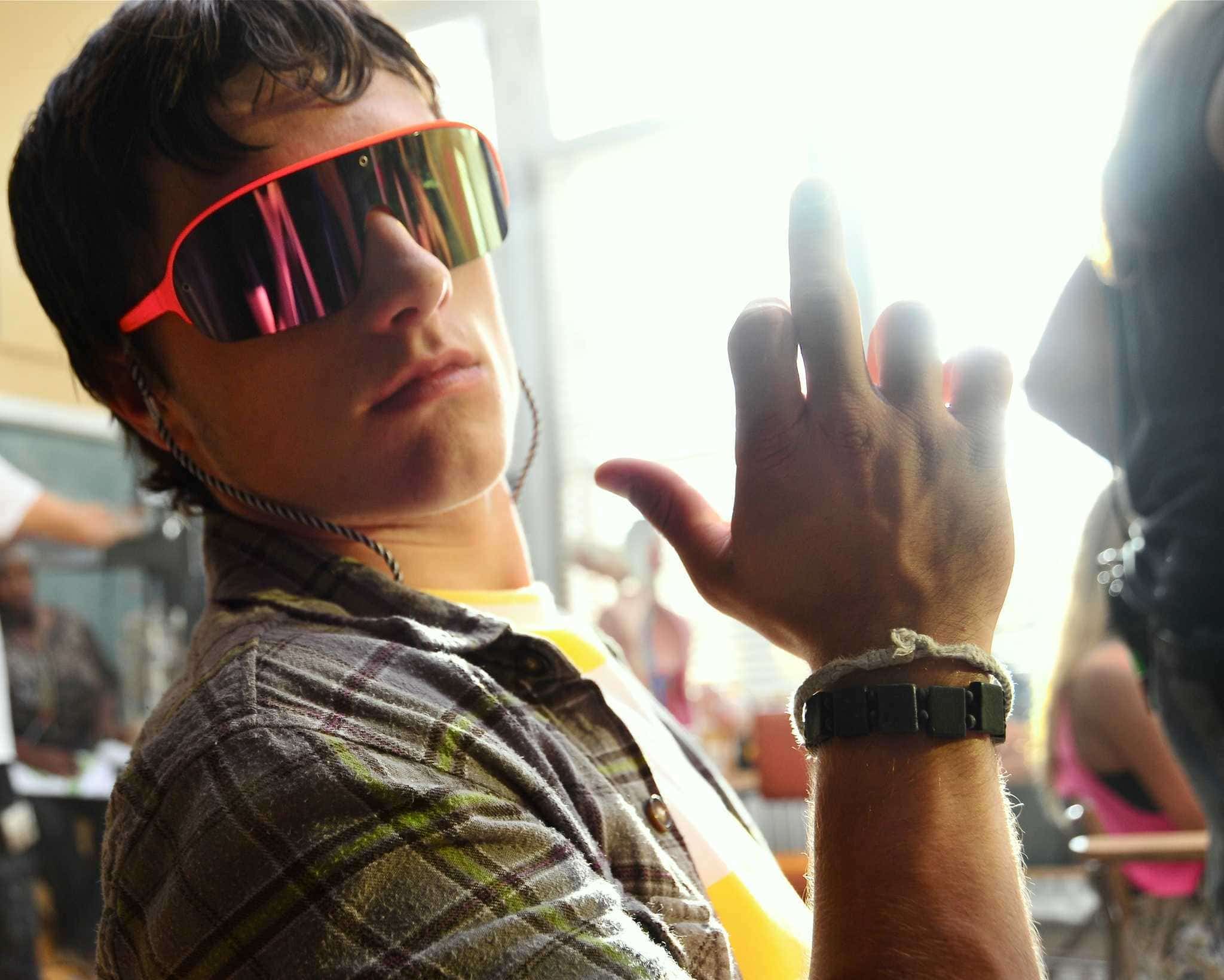 In the universe of DETENTION: There can only ever be one of you. If you travel back to yesterday to meet yourself, it won’t work, because your future presence will erase yesterday’s version of yourself.  This works the same for travelling to the future. If you travel from your present to the future, your future self will disappear when you arrive. The time traveler always take precedent.

This explains how Riley and Clapton can go back in time to 1992, witness the apocalypse, and then jump back six minutes in the past before the apocalypse and not run into each other. It also explains how they can go to the future and not have to deal with alternate universe doppelgangers.

This rule (like all these rules!) is never discussed in the film (because I made it up), but nobody ever meets themselves, so there’s no conflict.

THE CONSTANTS ARE ALL ABOUT PERSPECTIVE 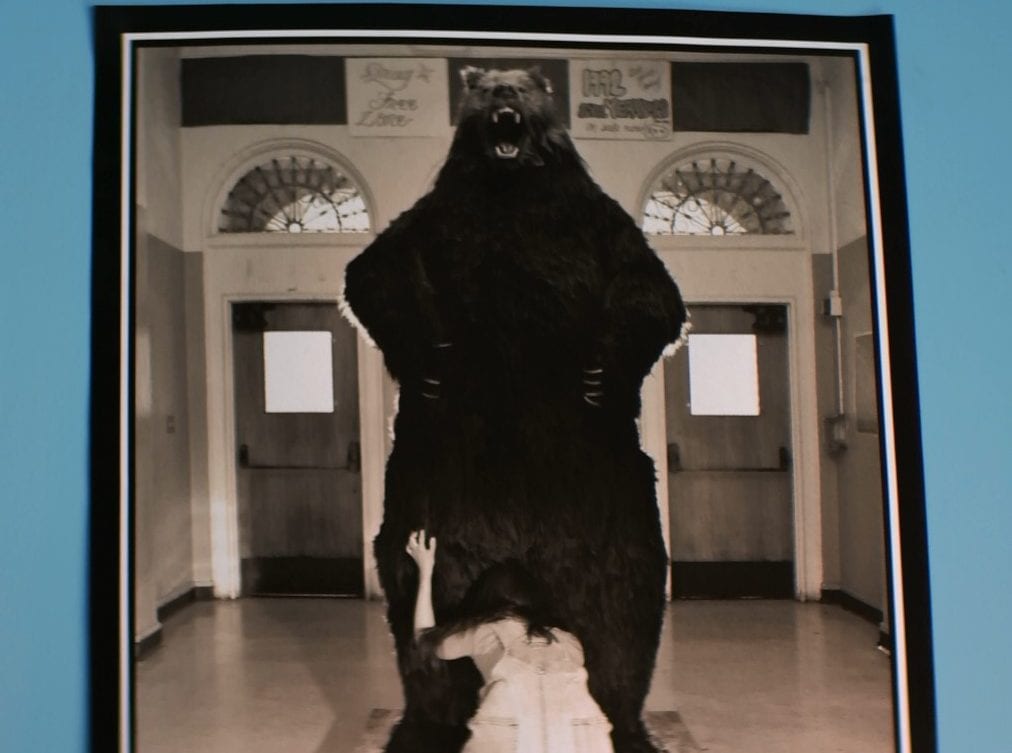 You see them at the start of DETENTION and at the end they are all revealed be the result of Riley and Clapton travelling back in time.

This could easily be hand waved away by applying the multiple timelines theory, right?

Now, I will tie myself in knots trying to justify on this could work.

Not only is anything possible, but it has happened, somewhere.

Time travel works in many different ways, you can have the multiple time streams theory like I presented a few paragraphs back, but you can also have the idea that time can be locked and the present will reflect the changes that will happen from someone travelling back from the future and changing the past. This is a locked loop, but that means what happens in the present is a paradox, because there MUST BE a ZERO POINT TIME STREAM to begin the act of time travel –  a time stream where someone travels back to the past for the FIRST TIME. The ZERO POINT TIME STREAM is the first time someone travels back and everything beyond their arrival from that point on now a LOCKED LOOP, which still works with the the multiple time stream theory, because time streams never stop existing, they are merely left behind when another one is created.

The version presented in the film DETENTION  is not the ZERO POINT TIME STREAM. 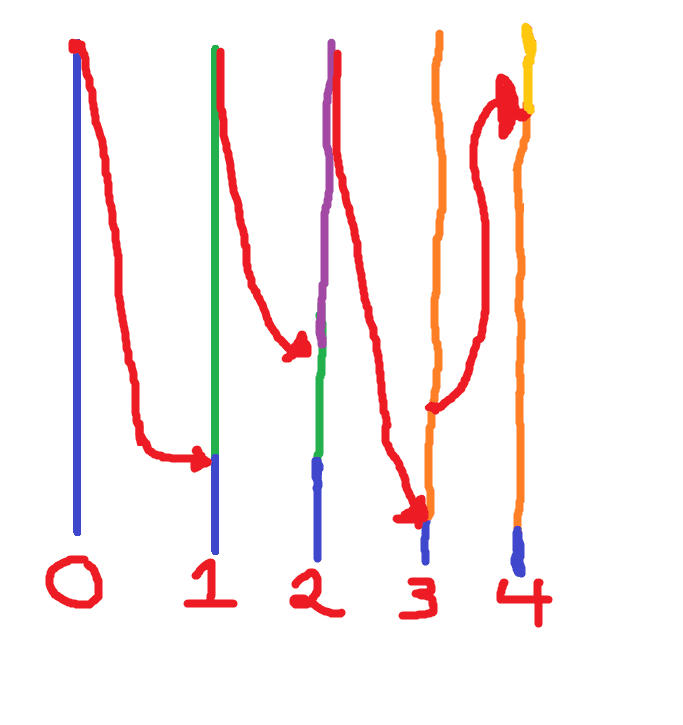 We could be watching time stream 2 or even 9 in DETENTION. What that means, is that the Riley we see in the film comes after a Different Future Riley travels back in time to 1992. Why? It doesn’t matter. She went back, did some stuff VERY similar to what we see in the film version of DETENTION (many worlds!), which includes the blow-job bear photo and kicking her shoe in the glass case, but the bomb did go off in science class and scar Verge. In 1992, The Future Time Travelling Riley we never see (who may or may not have been with Clapton, it doesn’t really matter)  then traveled to the future of the ZERO POINT TEAM STREAM, went into hiding or died. After all that, time goes on, her parents conceived and gave birth to Riley, that Riley grows up, and we catch up with her in the second scene of DETENTION. 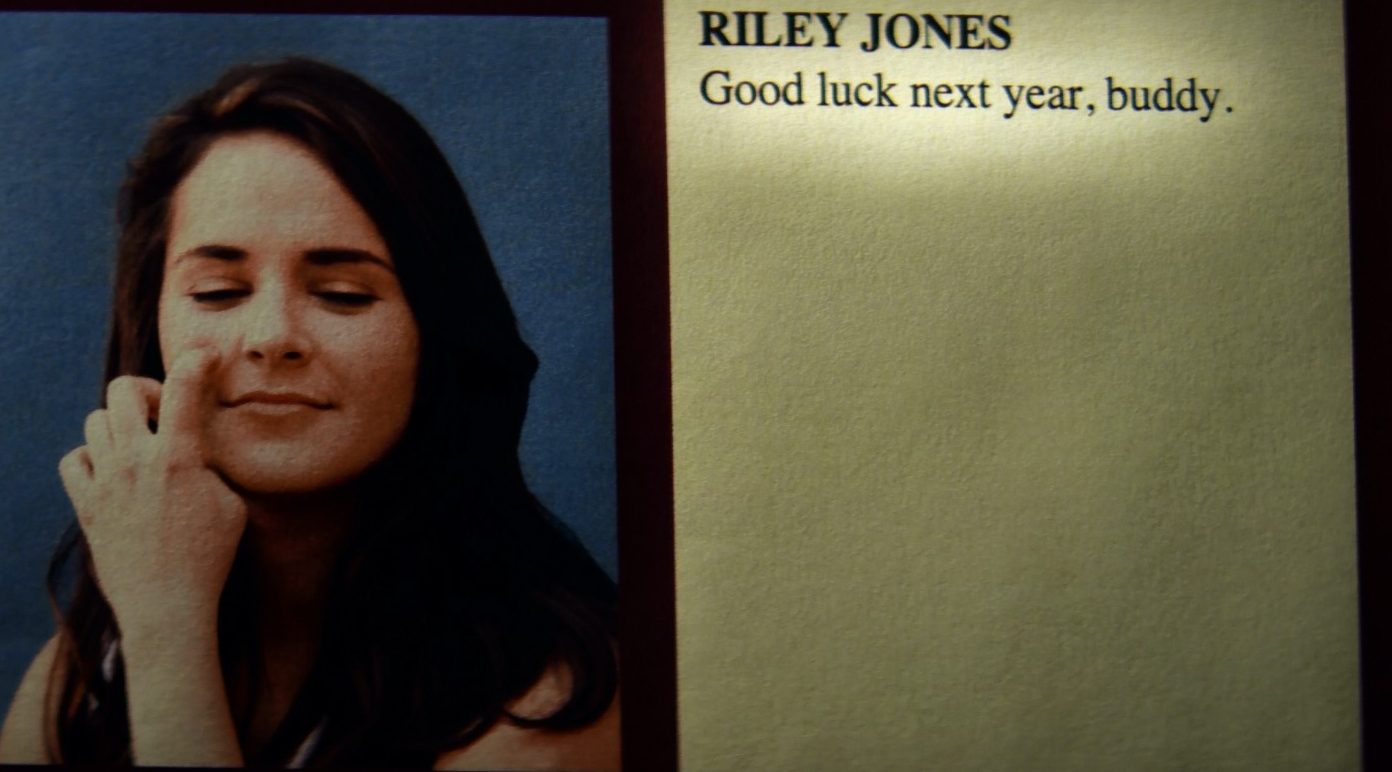 I’ve essentially created an entire prequel to DETENTION  to explain some jokes.

THE OVER COMPLICATED SCIENCE OF SWITCHING BRAINS

“The irony of Sloan’s story, if you pay attention to it, is that it doesn’t make sense.” – Co-Writer Mark Palermo on the Commentary Track

This is going to be like trying to explain the plot of John Woo’s FACE OFF “See, Nic Cage is John Travolta whose pretending to be Nic Cage and…Urghhhhh”

Please get out some graph paper.

In the film, the character of Ione switches minds with her mother Sloan. Ione’s 2011 Brain jumps to her mother Sloan’s 1992 body (played by the same actress as Ioene 2011), Ione’s mother (Sloan) 2011 brain jumps in the brain of Ione’s 2011 body to win a dance contest, and Sloan’s 2011 body is abducted by aliens (so she isn’t comatose due to being brainless in 2011) Now, this creates problems only because of how the film plays out at the end.

Here’s how I shakily justified it to myself- Sloan’s 1992 brain doesn’t exist anymore in 92. Her daughter’s brain jumped into hers and she was erased. Ione’s 2011 brain in Sloan’s 92 body gave birth to Ione’s Brain and Body 2011, and this version of Ione 2011 had to deal with an adult that was trapped in constant teenagerhood (let me have this) and she had to become the adult in the relationship. There is no way in hell this is what the Kahn and Palermo intended.

Boom! Problem solved. Make sense? No. Okay. Well, it makes sense to me!

WHAT? I DON’T UNDERSTAND. THIS IS STUPID. 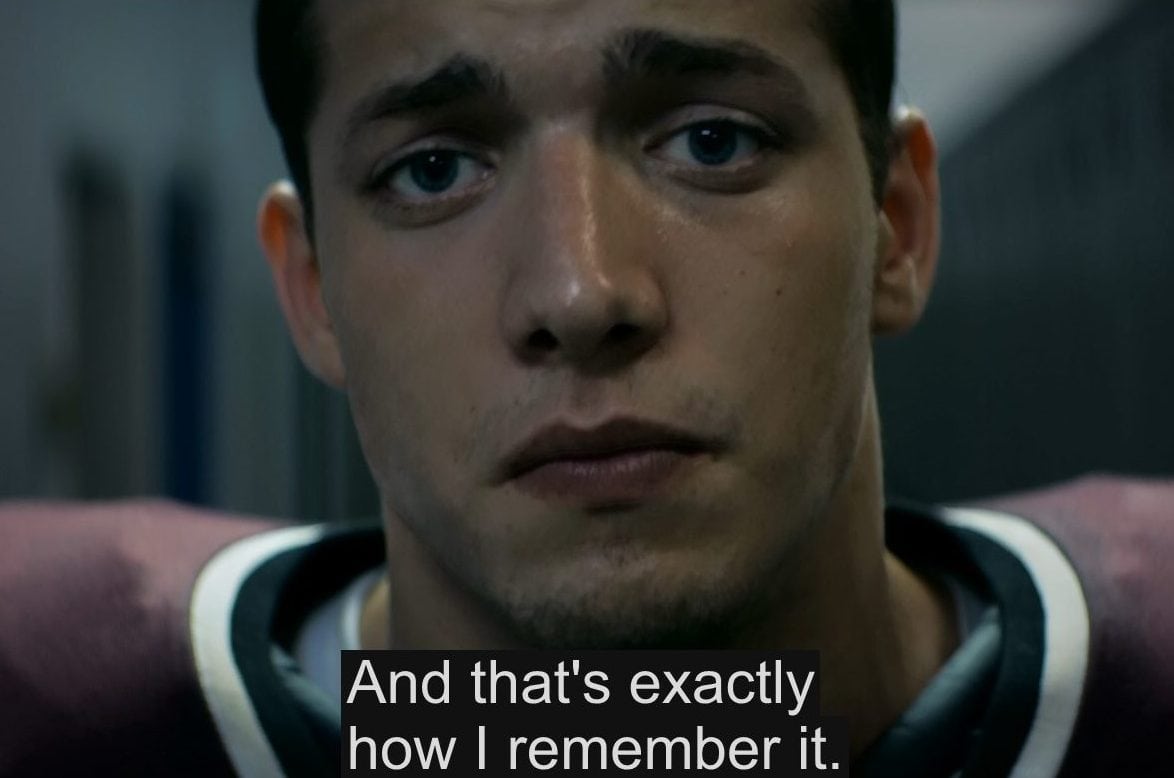 That’s okay. None of this really matters.

It’s simply the rambling of a fan that enjoys a film so much he makes up ways too find new layers to discuss it.

You have a conflicting theory? Let us know in the comments!

I originally got thrown off by the reveal that the killer got his face burned in the past, but that doesn’t matter. He is a killer in every timeline we see in the film and its unrelated to the time travelling (as far as we know)

There’s a lot of WAIT, BUT WHAT IF…in these rules: Like what if a time traveler goes to past, and hangs around, and then their born…does that mean they will baby disappear if the time traveler take precedent? Those type of paradoxes never happened in the film to my knowledge, so I didn’t worry about it.

The film states that all time streams run concurrently with each other (“the world will end in ten minutes in 1992 which will end time here”). I’m cool with that.

I wrote all of this to the strains of Hanson’s MmmBob.

No, I don’t understand the time travel in PRIMER.

You should watch TORQUE. That film is great.

And if you haven’t gotten you fill of insane fan theories based in zero reality, you should check out the great documentary ROOM 237.

“What about the kid who’s been in detention for 19 years and has never aged?” Come on, DETENTION has a teen with fly blood and a space bear. It’s just a movie!

Lets all dance the robot. 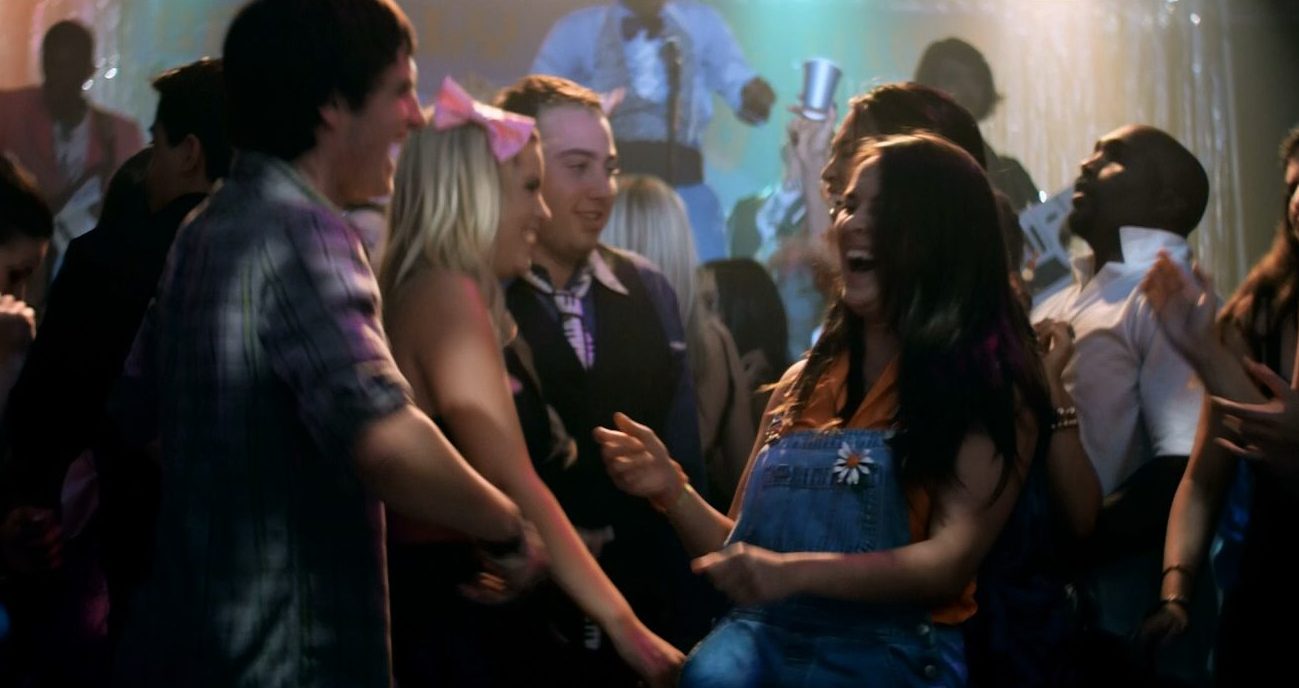