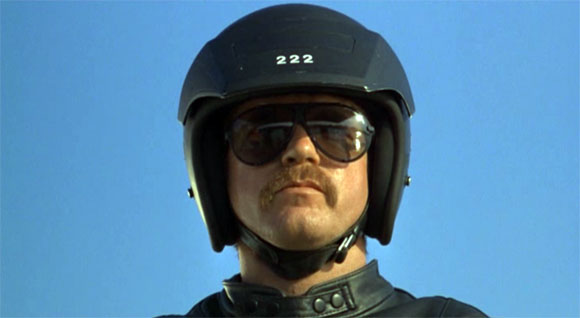 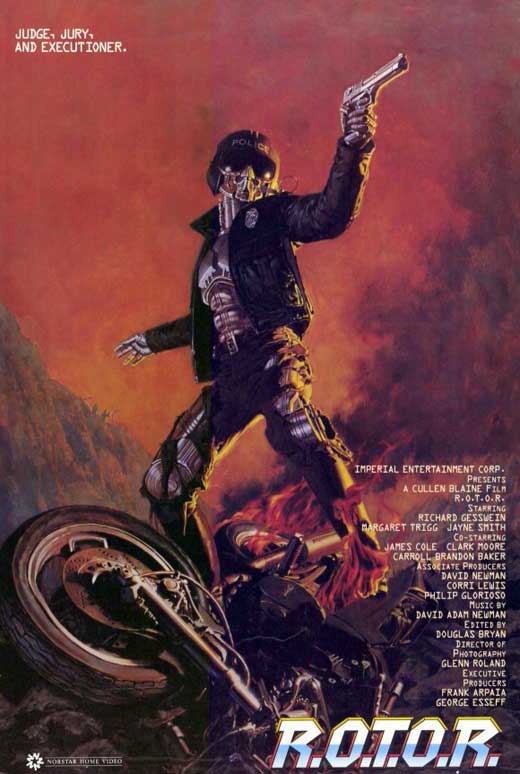 Look at that poster. Just soak it in.

Okay. Now forget it, because that never happens in the film. Yea, it’s your Dad’s friend Jeff. The guy who clung to the memory of 70s cool until he died in that drunk driving accident a few years back.

ROTOR is a bad movie of legend. It’s got terrible pacing, zero action and a hero dubbed in a hilarious out of place Texan accent. The titular ROTOR (or ROBOT COP if you want to by the Japanese title) doesn’t show up for forty five minutes, and when he does,  he instantly goes pure evil and chases after a woman that got a speeding ticket WESTWORLD style. His big scene is angrily pushing open a door. Our hero, Dr. Coldyron (pronounced coldIRON) doesn’t show up until the climax, where he gets someone killed, and THEN saves the day.

Every bit of dialogue sings like an spring breeze:

“Let me tell you something, mister. You fire me and I’ll make more noise than two skeletons making love in a tin coffin, brother.”

“You look like you got both eyes coming out of the same hole!”

“When I stack ’em, they stay stacked.”

Scenes go on a little too long. Crazy digressions are the norm. There’s a wacky comedy robot sidekick.

ROTOR has the same stiff sensibilities and 80s idea of comedy that were constantly present in shows like FANGFACE. I’m not surprised the director worked principally in animation.

I wonder what it was like shooting the film. Did everyone have a straight face the entire time? Did the director think this was a great work? Something that would be remembered? He had just gotten out of a dead end job, and his wife had left him, so this was his one shot. He was going to prove something of himself. He was going to make a movie that people would remember. “ROTOR” films critics would whisper to themselves in uncontrolled awe. “ROTOR” the children would say, playing with their ROTOR action figures, expanding their minds to heights that they never knew existed. He would do all that work. It would be his.

It’s always beautiful for a man to have a vision.

ROTOR was recently released on Blu-Ray (in a double pack with MILLENNIUM) by SHOUT FACTORY. No special features.

Probably because they didn’t want to soil a perfect object.

Or the people that made it were embarrassed.