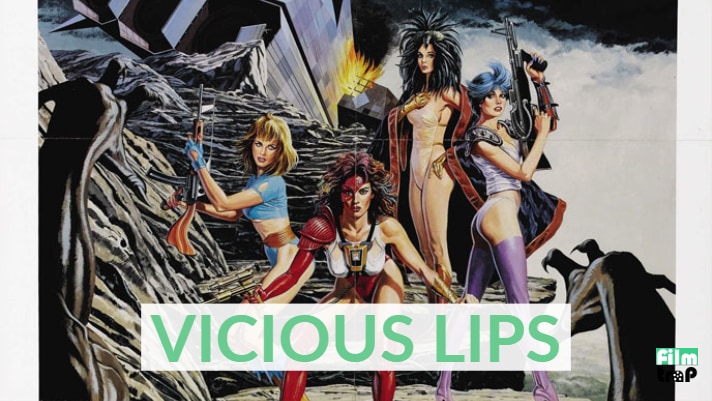 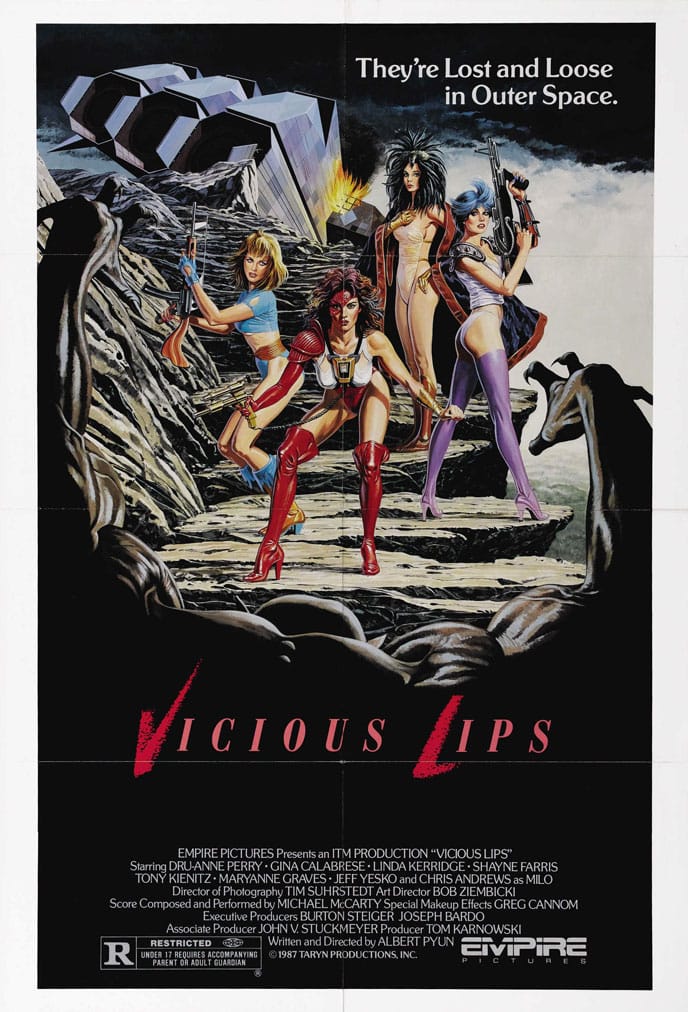 VICIOUS LIPS is a mess of a film. The poster promises the intergalactic rock’n’roll adventures of an all-women new-wave band, but the final result is a disorienting half-finished nightmare. It’s got a great premise: The up-and-coming rock band The Vicious Lips must race across the universe to make it to their first big gig, but instead of going on a goofy galactic road trip, their spaceship instantly crash lands on a desert planet, and we spend the rest of the film watching the unenthused band members, who can only be told apart by their wicked cool wigs, walk from nondescript room to nondescript room. There’s an escaped monster on the loose, who looks like a half-transformed werewolf, and he doesn’t do diddly squat. On the plus side, the film looks great thanks to the colorful cinematography by Tim Suhrstedt, and we do get some catchy 80’s style power synth songs by Sue Saad. The film devolves into a head-scratching finale where the lead singer runs through a haunted house populated by cannibals, and it’s all revealed to be nothing but a dream. The running time is padded out with the band singing “Lunar Madness” over TWO montages of scenes we just witnessed. Ouch.

It’s impossible for me to watch VICIOUS LIPS and not think that Pyun was unconsciously articulating his own state of mind. After the mega success of his debut feature THE SWORD AND THE SORCERER, Pyun must have believed he was a hair’s breadth from the big time. Sadly, everything went wrong on his second picture RADIOACTIVE DREAMS and the bond company was forced to step in. Pyun was kicked to the curb, the film was finished without his involvement, and he was left crushed and empty-handed. VICIOUS LIPS was supposed to be Pyun’s ‘prove them wrong’ follow up: A simple, high concept, sellable product, that could be knocked out quickly in seven days to the tune of $100,000. It obviously wasn’t enough time or money, because the final product stinks of sheer desperation. Master shots are edited haphazardly together in a dreamy LAST YEAR IN MARIENBAD style, subplots are introduced and dropped, and whole conversations are steamrolled into musical montages. Yet, the bareness of its visual style and uneventful story seem to be a door into Pyun’s emotional state: The band’s singer, desperately wants to be a star and is willing to do anything to achieve it, but all she gets for her troubles is misery. Just like Pyun was always on the cusp of Hollywood success, but found himself tossed back into the no-budget ghetto again and again.

I hated VICIOUS LIPS the first time I saw it, but on this viewing, it revealed itself as an Antonioni-esque tale of isolation and statis, with the dreamy feel of a cut-rate LAST YEAR AT MARIENBAD. It may seem like an in-joke that the Vicious Lips are going to play their big break at The Radioactive Dream, but its way sadder when you consider what that means in the context of Pyun’s career.

Empire Picture pictures released the film quietly in a few theaters and then dumped it on video in a handful of countries that did not include North America or the UK. It was only released in the last few years on DVD and Blu-ray by Shout Factory.