Weird on the Road with MOTORAMA – Review 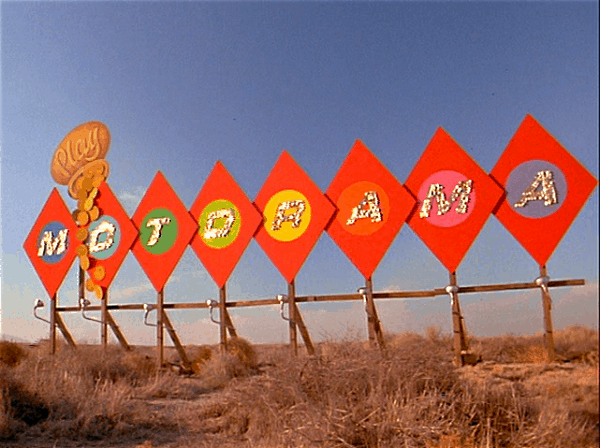 Motorama is pure fever dream cinema and the kind of film that just doesn’t get made anymore: A medium budget David Lynchian road adventure that is equally cock-eyed dark comedy and R rated metaphorical journey that happens to star a kid. It could only exist at a time when producers heard a log line and went “Yea! That sounds fine! Here’s a few million to go do it. Deliver whateverthehellyoumake and we can make up our money on home video afterwards!” 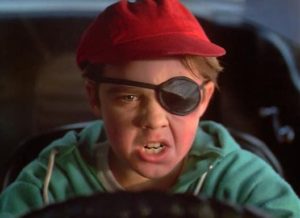 The story is straightforward on the surface — a  boy leaves his terrible family life and hits the road in search of riches through a game where you collect letters at gas station that spell out MOTORAMA. It’s doesn’t take long for things to get real weird as we realize that no one questions the fact that a ten year old boy is driving a car down deserted roadways, the money is looks like it came out of a monopoly box, and everyone the Kid meets is an out and out weirdo. The cast of this film is absolutely stacked with a murder’s row of genre A-listers, with the the likes of Mary Wornov, Jack Vance, Dick Miller and Flea all making welcome appearances. One of the film’s decisions I was less enthusiastic with is that there’s very little dramatic meat for the kid to face on his journey, as he’s mostly just run through the ringer by the terrible people he meets, but it helps to have such fun faces to do the torturing. The Kid is actually a an asshole that only cares for himself, which is a nice change of the precarious version of this character that you’d expect. He mostly moves in a straight line and survives instead of overcomes, but that’s once you realize that’s the case, it calibrate he way you experience the the rest of the film. Just enjoy the weirdness. 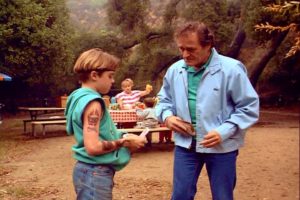 Give a hand to director Barry Shils (who produced of a bunch of Larry Cohen stuff) and writer Joseph Minion (of AFTER HORUS and VAMPIRE’S KISS fame) for bringing such an singular vision to screen. It’s hits all the requisite 90s dark comedy beats, but it’s also weird on an impressive scale, and it feels like something that could only exist in its particular moment. Motorama can be found on a budget full screen (open matte) DVD release, but it deserves more love. Drew Barrymore is on every home video release cover and she appears in exactly one dream sequence.